Platform
for the
City of Charlottesville

We, the Republicans of Charlottesville, believe that it is time to transform the phrase “World Class City” from a slogan for the elite to a reality for the people.

Charlottesville is a great place to live for the majority of our citizens. The free enterprise system has yielded numerous thriving businesses of enormous and inestimable value to the city and its citizens. Cultural and educational opportunities abound. However, some commercial areas of the city remain underdeveloped and a substantial portion of our fellow citizens remain dependent on the government for their subsistence.

We can do better, we must do better and we will do better – by empowering people and constraining government.

Republicans believe that all of our residents are entitled to equal rights, equal justice, and equal opportunity and are capable of assuming their responsibilities as citizens in a free society. Breaking the cycle of dependency within the city limits is an urgent moral imperative requiring creative thinking and bold action. The ideas expressed herein reflect a back-to-basics approach consistent with our core principles of freedom, independence, responsibility and accountability.

Compared to the state as a whole, Charlottesville ranks near the top in core spending per student and near the bottom in reading and math performance.

Republicans believe that this performance is shameful and inconsistent with the values and the resources of a world class city. We can do better, we must do better and we will do better. In fact, we must do whatever it takes to educate our youth including, but not limited to, alternative educational models and structural changes to the existing system.

We would provide portable tuition vouchers for students who are eligible for the “free or reduced” lunch program. We would sponsor legislation necessary to redeem these vouchers at public, charter or private schools. Republicans believe that parents, not government bureaucrats, should decide where their children attend school.

We believe that the school board should abandon the middle school model in favor of the K-8 educational model. Children are best served by a school model that keeps siblings and friends together in a safe place with a coherent educational curriculum until they are 13-14 years old and ready for high school.

Several other major school districts have successfully implemented such a change and realized significant benefits.

We support recruiting any one of several successful charter school programs, such as the Knowledge Is Power Program (KIPP), to open one or more charter schools in Charlottesville. Competition will make the remaining public schools better.

Republicans believe and studies have shown that property ownership is an effective path up from poverty. The policy of corralling the region’s underprivileged citizens into concentrations of government-owned public housing is wrong and detrimental to those it purports to help.

It has impaired their ability to move out of poverty by concentrating crime, single-parent families and other obstacles to independent living.

Law abiding and responsible residents of public housing deserve the opportunity to improve their quality of life and escape from the cycle of poverty while maintaining a stake in the community. We can do better, we must do better and we will do better.

We support a program for city-owned public housing stock that would be modeled loosely after the Homestead Act of 1862.

Eligible residents of public housing would be given the opportunity to occupy the city-owned units and demonstrate responsibility and self-reliance over a finite period of time. Upon fulfillment of certain predetermined criteria, they will be given clear title to their property.

Clear title to property would provide leverage for further economic advancement and would encourage, rather than discourage, the formation of nuclear families.

Clear title to property is virtually meaningless when local governing bodies can use the power of eminent domain to take private property and pass it to another private person or entity solely to generate tax revenues.

Long-time minority residents of Charlottesville have experienced this extreme use of governmental power firsthand. We support an amendment to the Constitution of Virginia that would restrict the power of government to take private property to those situations where the taking is truly for a public use.

Republicans believe that the free enterprise system is the most productive supplier of human needs and economic justice. However, the tax and regulatory burdens imposed by the City of Charlottesville choke economic freedom, discourage the formation of new businesses and stifle entrepreneurial activity, particularly in the minority community. In general, Republicans believe that regulations should be streamlined and taxes reduced across the board. However, other strategies may be necessary to catalyze economic opportunity in the minority community.

We advocate establishing enterprise zones in the corridors along West Main Street, Preston Avenue and Cherry Avenue to encourage the formation of minority owned businesses.

Republicans believe that officials at all levels of government must be personally accountable for exercising fiscal responsibility and budgetary restraints.

Our part-time City Councilors, following the advice of the full time, unelected city manager, have created one of the highest per capita tax burdens in the state.

When confronted with such facts, the city manager often states that he is merely following the guidance of City Council. When City Councilors are similarly confronted, they often claim deference to the “professional” judgment of the city manager. In other words, no one is directly accountable to the people.

We can do better, we must do better and we will do better. Republicans believe that the time has come to separate the executive and legislative powers of government and hold the executive branch directly and independently accountable to the people.

We support the direct election of a full time mayor as the head of the executive branch of government.

We advocate electing all or a majority of city council members from electoral districts rather than at large. This system would improve citizen participation in government and promote a more intimate relationship between councilors and their constituents.

We believe that all elections at the local level should be non-partisan in nature. The current system of partisan elections has yielded a monopoly on power that sustains itself on patronage and machine politics rather than the strength of its ideas. The result has been declining voter turnout and interest in local elections. Republicans believe that democracy itself has been the loser.

We support the “Annexation and Revenue Sharing Agreement” which requires good-faith negotiations between the two governing bodies to improve government efficiency by consolidating certain government services.

Existing tax law in Virginia is intended to limit the ability of the local governing body to generate greater tax revenues solely as a result of inflation in the housing market. However, the statute is opaque and poorly understood. As a result, City Council has often voted for a tax increase while falsely claiming to be providing tax relief. In fact, City Council has specifically voted to raise property taxes each and every year for the past thirteen years. Many working- and middle-class residents have moved out of the city to escape the ever increasing tax burden. This out-migration is detrimental to the long-term health and vitality of the city.

We believe that the annual tax rate should be reduced in accordance with Virginia law to compensate for the increases in assessments. We further believe that all City Councilors and government officials should be completely candid with the voters and fully explain the fact of and the necessity for any new tax increases.

New LegislationWe would advocate changes to clarify the existing law and minimize the opportunity for abuse by elected officials.

We, the Republicans of Charlottesville, consider ourselves heirs to the Party of Lincoln. We pledge to meet with anyone, at any time and in any place to engage in substantive and ongoing conversations about the serious issues confronting minority communities in Charlottesville. 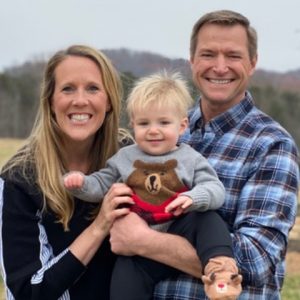 I am honored to serve as your Chairman and support the interests of conservative voters in the City of Charlottesville.  As a retired Air Force colonel with 27 years of  active duty service, I look forward to helping advance our committee’s commitment to promoting liberty and prosperity for all Virginians.  After retiring from the military, Kellie and I moved to Charlottesville just in time for the arrival of our first child, Caleb.  We feel exceptionally blessed to call Charlottesville home and build our new family here.  Although I already know many of you, I look forward to connecting with many new members of our community and learning from your insight and perspective.  As your chairman, I am committed to implementing those core values that carried me through my Air Force career—integrity, service, and excellence—building our Charlottesville team with transparency and unity to help us make a real difference for conservative principles in our local, state, and federal government.  Please feel free to reach out to me at any time with your questions or concerns.